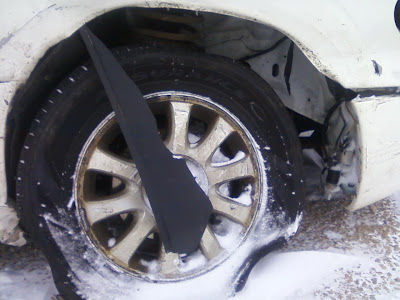 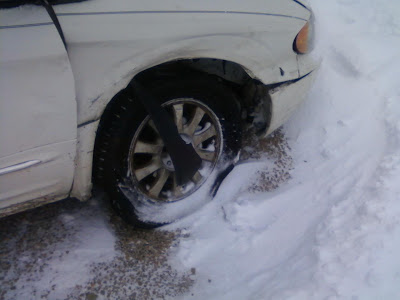 Yesterday after church and on our way to my Dad's 49th birthday party, we had an accident. We were driving through an uncontrolled intersection and were broadsided by a dude in a car. I was reading a text on my phone, and then BAM we were hit on my side. I guess I grabbed Jason's leg, but I don't remember it...I just remember looking at him and seeing his head slam into the window, and hearing a thunk. Not so awesome when it's his head cracking against the window. His nose bled instantly...the kids were pretty upset to see their dad with blood leaking out of his face. I turned around and asked if everyone was alright...they all had stunned looks on their faces and eyes as big as saucers. Jason got out to make sure the other guy was ok...and I got out in my Sunday best and walked around in the snow trying to absorb what happened and then called 911. The kids were all crying, and I was trying to calm them down as I talked to the chic from 911, who kept asking me where we were. Well, for one thing...I always thought they could pinpoint us, and for another...I was trying to calm down the kids and get their coats zipped because there were huge fluffy slush flakes coming down on us. Squad cars showed up...a total of 6 I think. Then a fire truck. I think maybe 2 first responders...and then the ambulance for Jason. He eventually opted not to use it..they took his vitals and his blood pressure was elevated. Go figure. The guy that hit us, Donald...came towards the kids and I and looked like he wanted to throw up seeing all the kids pile out of the van. I was getting worked up because there was lots of fluid leaking from under the van...and I wanted everyone out in case it was anything that could explode. Jason said they were fine, and I insisted that the get out. Please.Get.Them.Out.NOW...this is not hard!! So out they came and sat on a wooden plank flower bed thing. They all had tears streaming down their cheeks, all very quietly though. You'd think they would be loud because of all the commotion of the squad cars and fire truck....but they just watched their dad bleed from his nose and mouth and cried. Archer was shivering and I was so sad about that. I kissed them all and asked if they were okay. They all said yes, and then I told them everything was going to be okay, grandpa is coming for us. Donald came up and I wanted to hug him. He looked so scared that he hit a van full of children. He asked me if they were all okay, and I said yes. He asked again, and I said "yes, definitely." He asked them each one by one if they were okay...are you sure you're all okay? I asked what about you, are you okay? He said yes, shook up but not hurt. They towed the van and Don's car...they were out of commission, so to speak. The kids sat in a squad car and talked with a very nice cop while Jason was in the ambulance getting checked over. They invited me in to warm up...I didn't feel very cold, but I went in anyway to make sure he was okay. The tow truck left. The fire truck too. Don must've had a ride show up. Squads left, all but the one where all the kids were keeping warm. The officer loaded all our things into the ambulance so they didn't get wet, and said he had another call. He carried Archer to me in the ambulance and loaded the kids in one by one. We all sat in there to keep warm until our ride showed up. All the people who showed up were very nice...we need to write a letter of thanks.
My parents and Nikki and Tony showed up to haul us all to my parents for the birthday party. It was such a weird feeling all day...I was trying to remember just how it all happened. Jason said later that he remembered every detail like he was watching himself bleed into the snow and watching himself talk to Don. I couldn't remember details...just the general jist of what happened. It dawned on me that our vacation fund, to be used for a trip to New York in April would now be used responsibly to buy a new vehicle. It's okay...at least we're all okay.
We took my parents van home...Archer said "don't cwash, Dad!" and "don't have a axinent...don't crash cars" all the way home. They made sure we wore our seat belts.
We are waiting for the insurance company to give us the verdict on whether they're totaling our van or not. It sounds likely, but for now I'm stressing over all the unknowns. Hopefully we'll know more tomorrow...but we're definitely not buying another white van.
written and illustrated by: Amber at 10:04 PM 11 comments: