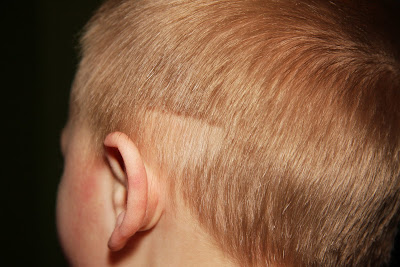 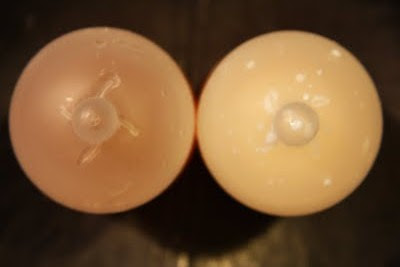 For anyone trying to wean and all else has failed, I would recommend these little numbers. They are working better than anything else we've tried, we're actually getting him to take some milk from them, which hasn't happened with anything else. The next step is that icky tasting nail polish...but I hope for his sake and mine we can kick it without that drastic of a measure.
In other news...Trae wore a pull-up while out and about today and stayed dry ALL DAY until we walked in the door. Hopefully we can get him potty trained with one box of those suckers, because I almost fell over when they said it was $75 for a box of pull-ups and a box of diapers, and 5 measly avocados at Sam's today. I asked Trae last night when he was going to start wearing underwear, and he said "a couple weeks..."
***I noticed this little divit in Trae's hair yesterday and asked him who cut it. He reached back and rubbed it and said "Brookewyn do it..." so I asked when, and he said 'couple weeks..." Turns out he did it himself with Jason's razor. :)
written and illustrated by: Amber at 5:08 PM 5 comments: