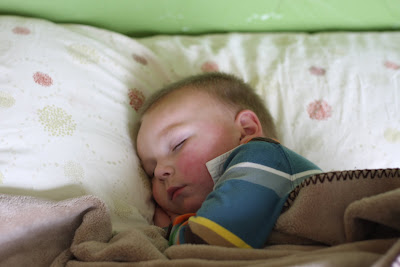 Trae insisted he didn't need his nap today...so when he came out with some spray I bought from Arbonne that I used to spray Archers pillow before bed when he was colicky, asking what it was, I told him it was sleep spray. "Ten I twy it, mom, ten I?" I told him sure, but it makes you go to sleep, so if you use it, you have to go night night. Apparently the stuff works, because he was zonked out when I checked on him less than 5 minutes later...or maybe he just needed his nap :)
written and illustrated by: Amber at 2:22 PM 9 comments: