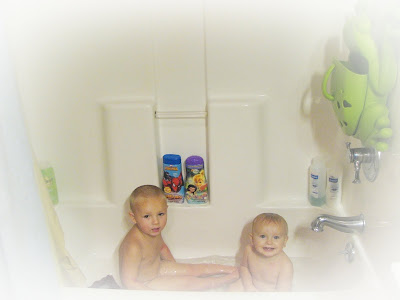 I'm having a blast spending time with my 2 little guys while the older 2 are at school. It's amazing the things Trae says now that he has a chance to get a word in edgewise...or maybe rather the things I'm hearing without the constant tattling and fighting between the older ones. It has been really good for both of them to be in school...they get along much better when they're home and they are both loving it. Poor Trae is having a hard time adjusting and I found him the other day after about an hour of laying in bed and assuming he was asleep, crying under the covers. I walked in and pulled the covers back and he whimpered "nooo, mama....don't..." and covered his head again. We talked about what was up.."i'm saaaad" and I asked if he missed Elliot and Brookelyn and he said yes and asked where they were. When I said they were at school, he started crying again and saying no. Yeah, it basically broke my heart...so we've been doing a lot of extra snuggles...which typically brings baby brother over for some attention too. I'm still working that out, because the 2 are so busy competing for my attention that they rarely play. I know it's coming though..the first day they were super cute playing peek-a-boo and squealing laughter rang throughout the house most of the day!
Yesterday, Brookelyn had her kindergarten assessment. They didn't have school for kindergartners and she was so bummed. I asked her what she did at the assessment and she said they asked her to count as high as she could, so I asked how high. She said 105, and I figured it she can count to 105, she could count higher, so I asked if thats as high as she can count? She said "no, but my throat was hurting from counting so high, so I stopped!" She doesn't seem to miss me at all and is gaining her Independence very quickly, which is a little hard to take. She's really cute at chiding Elliot to do his homework and hang his backpack where it belongs, and of course he responds by telling her she's "not da boss!"
It's Archer's birthday week...so that is bittersweet as well. This one actually seems easier on me than Trae's was. Jason is going to be out of town all week, so I'm a little bummed he won't be here on the actual day, but we have a party planned for Sunday. It should be interesting getting everything done that needs to get done by myself, and I have a long day shooting a wedding Saturday, so we'll see how it goes. I plan on taking the 2 little guys to Monkey Joes on the actual birthday and sending cupcakes for Brookelyn to school to make the day special for both of them.
I suppose thats the update for now :)
p.s. I hate this stand in for my other camera...I should be getting mine back good as new early this week. There hasn't been a day that goes by that I haven't wanted to take a picture of something...so I'm really looking forward to having my sidekick back!
written and illustrated by: Amber at 11:52 AM 3 comments: