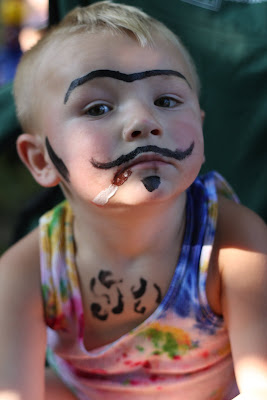 This kid is getting SO big for his britches....

We are doing well with the potty training for the most part, and when I say most part I mean the peeing part. He steals Elliot's underwear when I enforce underwear, because he refuses to wear a diaper except to bed or when we are out and about. Today, he slipped into Elliot's tighty whiteys and pooped in them 5 minutes later. I threw them out, because I hate having poop particles amongst the rest of my laundry. Anyhoo...Elliot saw them in the garbage and said "Aww, who pooped in my underwear, TRAE!?"

Today I made Mac n' Cheese for lunch and he was impatiently waiting to eat. I dumped the noodles in the strainer in the sink as he's pulling at my pant leg and begging for food. He looked at me like "you've got to be kidding me..." and said "no mom....me ead dit!" I took the strainer back to the stove and dumped the noodles back in the pan and he sighed again and said "no, mom...don't put a bagk on nair..."

He's been doing great going to bed and sleeping in HIS bed all night long...which was awesome because we didn't really even have to fight him on it. The other morning though, I woke up because Archer slammed his head into my face giving me a fat bloody lip, and discovered Tow Mater tangled up on the side of my head...courtesy of Mr. Traeman!
written and illustrated by: Amber at 11:40 AM 5 comments: