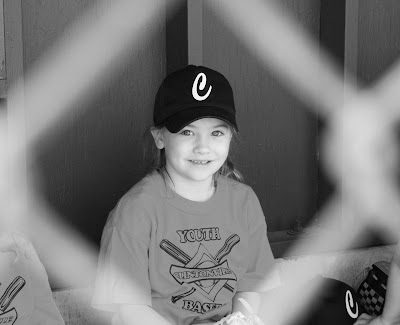 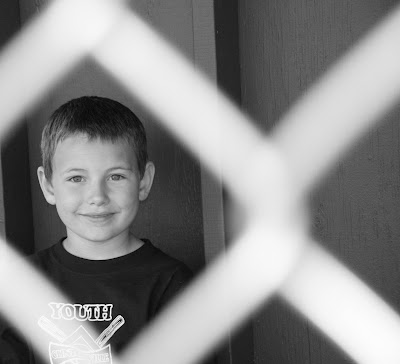 Elliot and Brookelyn both had T-ball games on Sunday. Both practices for Brookelyn's team were cancelled due to rain, so it was her very first time playing. It was cute to watch the kids play in the sand and point out the airplanes instead of focusing on the game. They get to bat until the hit and and they don't tag them out so they all got to make it home. There is only two girls on her team, and she lets the other little girl use her pink bat;)

Elliot's team gets three strikes and then they're out. Elliot struck out both times and I was wishing with every fiber of my being that his bat would connect with the ball, but it never did. He can hit the ball, he does consistently at practice, but I think the pressure of having my parents and his aunt and us made him a little nervous. Last night he hit a single and a double and made it home so we were really proud of him. His team won 14-5 last night and 10-0 on Sunday.
You wouldn't believe the coaches. Last night the other team dropped the ball and no one picked it up so the coaches on our team had the kids run. The bases were loaded, but no home runs were made and the coach from the other team yelled "C'mon...you're gonna count that?" I thought his head might explode and our coaches said "we're just having fun" and he said "WELL WE'RE JUST TRYING TO LEARN!" He was catching the missed balls behind the plate and every ball throw back was thrown a little harder until the pitches just decided to let in go between his legs and had to go to the outfield to retrieve it. He must have realized how immature he was being because he cooled it after that. I thought it was ridiculous that he got that worked up about it, not to mention that the kids were uneasy around him and he wasn't very encouraging to his team.
written and illustrated by: Amber at 9:56 AM 3 comments: