Kelaya is a mom. Most of us can relate to that.

Except we can't, because we're not on the streets with 3 kids in tow, not knowing where we'll sleep that night or where the next meal will come from. We aren't resigned to begging in order to keep our kids safe and cozy and fed.

Kelaya needs our help. Please take a moment to read her story and help if you can.

It's amazing what we can do to help one another. Thank goodness for people like Tangobaby.
written and illustrated by: Amber at 3:10 PM 4 comments: 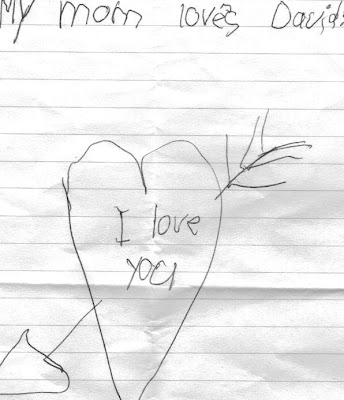 I grew up the second of 4 daughters. My Dad, of course, teased us all the time. (in a good fun way) One thing he always did, and always made me laugh, was making silly faces at me. It is one of my biggest pet peeves to have people make ugly faces at me...unless it's my dad, and I never make ugly faces, because well, I don't like to look ugly.
Except that, last night I started making faces at Elliot. He'd try so hard not to look again, but as soon as he did, I was ready with my nastiest mug. So he tattled on me to my mother, who gave him the ammunition he needed for retaliation....
Which brings me to the note above.
David was the poor guy I went to school that was always picked on, and for whom I stood up for because I wasn't the type of kid to stand by when other kids were being tormented. Because of that, we became sort of friends. One day he came to school with his Halloween loot, and boy had he scored big. Everyone was asking for his candy and pretty much just reached in and helped themselves as he stood there holding the bag as they rooted through taking whatever they liked. I could just tell that he really didn't want to share, but there wasn't much he could do and anyway, he did what he could to be liked. So I asked him for a piece all politely, because I didn't want to just grab like the others, but I wanted a juicy piece of Double Bubble. You'd think he'd willingly offer me piece since I was friendly, but instead he patted his lips with two fingers and said "only if you give me one of these" indicating that if I wanted to get my hands on his Double Bubble, I'd have to plant on on him. I passed on the kiss and the Double Bubble, regardless of what my mom told my kids.
So last night Elliot drew this picture and laughed with glee as I read it.
***************************************************************
I took the kids back into the doctor by myself in the pouring rain, but it's all good because I finally had an excuses to wear my awesome rain boots.
Archer has a nasty ear infection in his left ear, and probable allergy and/or viral induced asthma. He's back on another antibiotic and we're continuing the breathing treatments at 1/2 the dose as to make him less jittery.
Brookelyn has a virus which is making her asthma flare up, so breathing treatments for her as well.
Trae has a full body rash, that has been driving him mad from the itching. We are doing Benadryl, Hydrocortisone, and Aquaphor for him.
Despite the wheezing, all their lungs sound clear which was my biggest concern with all 3, and hopefully we will have this junk cleared up once and for all. As for the bags under my eyes, they are present and accounted for.
written and illustrated by: Amber at 12:33 PM 3 comments: