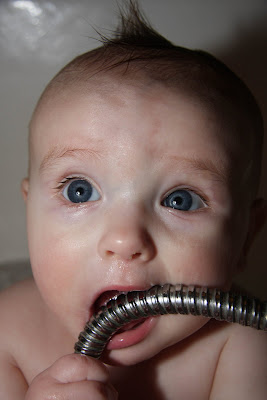 For more bathtime pictures, go here...
written and illustrated by: Amber at 9:19 AM 3 comments:

Grandma Pam bought the kids Crayola Color Explosion books for church on Sunday. I don't buy them because they are outrageously expensive, but it was a great treat that kept them occupied really well, and the big novelty of them is they only work with special clear markers, so no mess.


Trae is getting his molar teeth in, so he tends to drool a lot lot lot, especially when he's hunched over his color explosion book. He drooled all over the book, and viola' color!

So when the marker died 13 seconds after he began coloring with it, I had one of those a-haaahh!! moments. At first, I was like..."these are spit markers!" and then I was like..."I bet they're not, but it could be a side business..."

Yesterday, I was changing Archer's diaper, and he happened to be wearing a onsie, but then his shirt was a onsie, so 2 onsies really. It was one of those "please stop whining and crying both of you...I know you're sick, but sleep it off for mommy, pretty please...?" days.

So Brookelyn asks "Mom, why you can't button both of them at one time...?"

and she's all "why you can't button both the buttons at one time...?"

and I was like "Brookleyn, it's not like I have 2 hands! I have to button each snap separately because that's how it goes..."

and I was like "whatever, gosh!"
written and illustrated by: Amber at 7:54 AM 5 comments: