The Road to Recovery.... 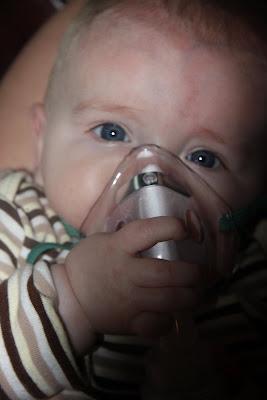 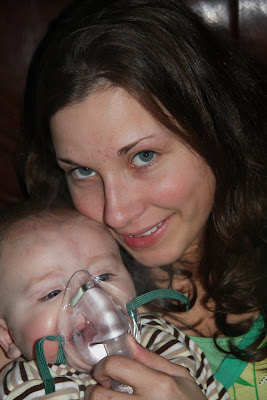 Today was the 4th consecutive week that we were in to see Edward, our hunky pediatrician. Archer woke this morning with a temperature of 104.4. He's been on antibiotics for 1 week, so I called to see what we should do, if anything.

They took X-Rays of his lungs, which had to be repeated because the first picture didn't turn out. His lungs showed inflammation, but no sign of pneumonia or RSV, thank goodness. We decided on a stronger antibiotic and breathing treatments for his wheezing. His double ear infection that he apparently had last week is clearing up.

The lady at the pharmacy was peaches and cream until she saw in her computer that I had picked up the SAME medication at a DIFFERENT Walmart just last week, and she didn't have it in her system. Like Amoxicillin has a street price or something. I told her I'd call just to make sure they sent it, which they said they had but if she didn't have it they could give her a verbal over the phone. Her peachy response to that idea was "I can't take a verbal, and our pharmacists don't like doing that because we have no idea who you have on the line. The pediatric nurse agreed to re-fax the script. After about 3 minutes of waiting, another lady asked if I had been helped and I told her we were waiting on a fax. The first lady told her she didn't have my script, and the lady said she was sorry she couldn't help. So I waited another minute and then I went and asked her if it had come through yet, because if not I'd be happy to call again. The broad said "oops, it just chimed...let me look" and pulled about 8 scripts off the fax. Lo and behold, mine was the bottom one, which makes me think it was there all along.

So I waited on the bench, glaring at her because I am so miserable with a migraine and cough. An old guy joined me on the bench and decided it was the perfect time to clip his fingernails.
Then once the scripts were filled, they told me they didn't carry the masks, so I had to locate them at a different pharmacy, call Edward back for a prescription, and then have Jason pick it up on his way home.
Hopefully we are all about to get better, we've been waiting on this sickness to lift for almost 2 weeks, and poor little Archer has been sick for 4 weeks straight.
written and illustrated by: Amber at 5:07 PM 10 comments: