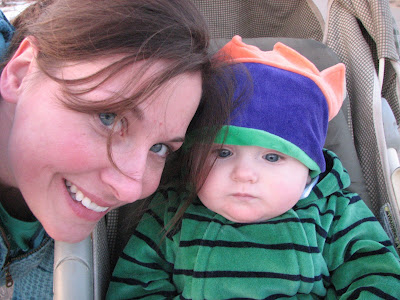 Prince Archer Cole was begging his Royal Princess Mommy to take him for the ride if his life in the stroller, her with her Royal Rollerblades strapped on her royal feet....(you don't even want to know how she get in this position for the royal photo, or how she managed to get back on her feet.) She had to overcome the mouse nest in her Royal Rollerblade, but not to be deterred, she ripped it out, threw it one the floor of the Royal Garage, and off they went. 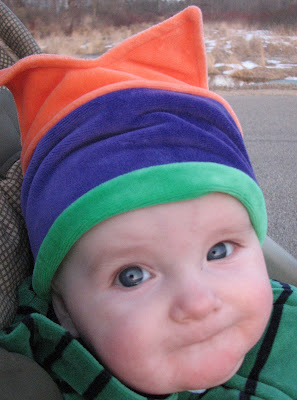 I have a very important and challenging job...they force me to look cute all day.
We trekked uphill in the Royal stroller and it started to get darker and colder with each passing minute. Princess Mommy's thigh muscles quivered and cramped and just when she got really focused on not dying from the horrible cramp in her hip...the Little Prince became unhappy. 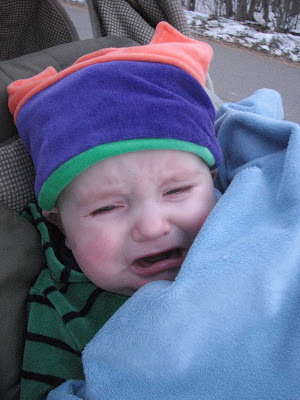 Princess Mommy reassured him she wasn't really dying, she just felt like she might and she was sorry for making him afraid. He protested he didn't much care about her plight, he was freezing cold and a little bored with this "adventure." Princess Mommy got going so fast she even impressed herself, and she's pretty hard to impress. All of the sudden, the Royal Stroller weebled and wobbled and then starting zigging when it should have been zagging and Princess Mommy knew something wasn't right. Suddenly, she heard a pop and then the Royal Stroller really veered off to the right and Princess Mommy finally realized the problem. 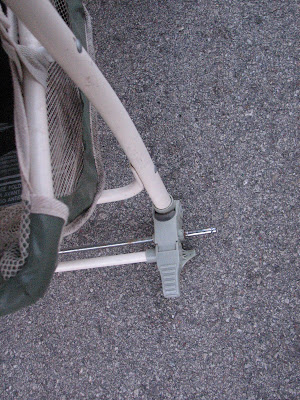 She managed to slow the Royal Stroller and set the Royal Prince gently down and turned back to see.... 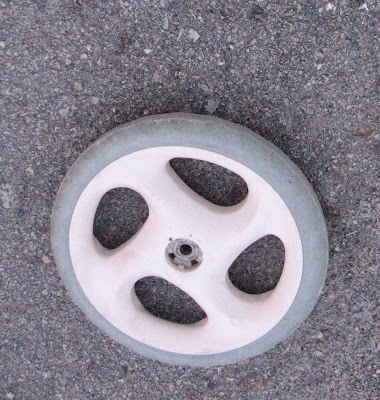 ....nearly 50 feet back was the Royal Stroller Wheel. Princess Mommy quickly retrieved it and attempted to mend the broken buggy. It was no use, and after having to stop, retrieve, and replace the broken wheel at least 2 more times, she waved good riddance to it and let bygones be bygones. She decided to call the Royal Manny (who also happens to be the Royal Daddy, because she could never afford both) to come with the Royal Limo and rescue them. There was just one problem... 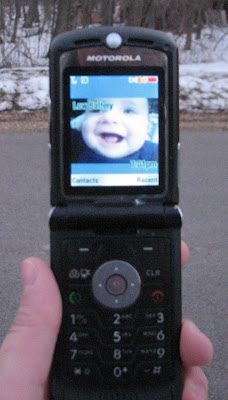 ...the battery on her Royal Cellular Telephone was low, and the Royal Manny wasn't answering his portable Royal Cellular Telephone, for he was out in the courtyard playing with the other Princes and didn't want his pockets to look all bunchy. By that time the cute Little Prince was fast asleep, trusting that Princess Mommy would get him home all safe and sound. (she was beginning to wonder) 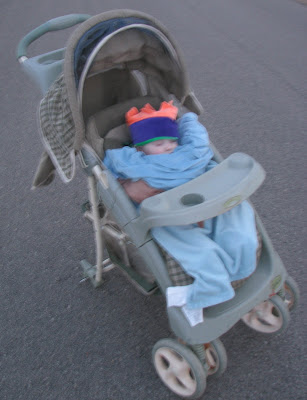 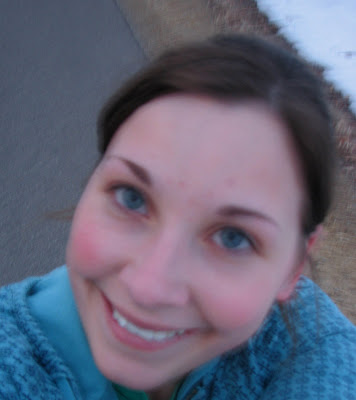 the best she could, because it was getting much to dark for the Little Prince to be out, and the Royal Manny never answers his portable telephone. She decided to snap a picture of her self being not frazzled and irritable about it because she surprised even herself. She figured she may as well make the best of the situation...if life hands you lemons...if your Royal Stroller turns into a lemon mid-stroll...
She decided to try and contact the Manny one last time because the cramp in her hip would not let up and she was starting to curse her Royal Blades, and also she was afraid she might lose control f the Royal Stroller and have a Royal problem.
Amazingly....the Manny paused his Mafia Wars session and snatched up his phone. She explained her plight and he agreed to come rescue them right away. 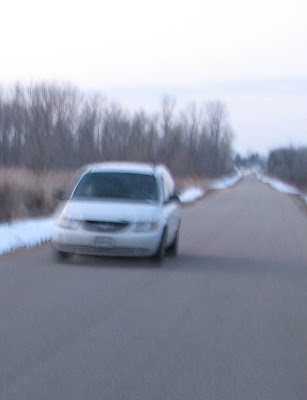 Princess Mommy was never so glad to see her Royal Limo pulling up even though it's a has been model with a dent in the hood. The pictures she took up Prince Trae and Prince Elliot driving the Royal Limo were blurry because she was shaking from the exertion of her little escapade. She feels the need to add here that she had the Little Prince only 1/4 mile from home and they were sitting on the Royal Manny's lap so everyone was safe, but not legal.

The Little Prince was all cozy in his seat and the Royal Lemon was loaded into the back of the Royal Limo to be put out on the curb the next morn. 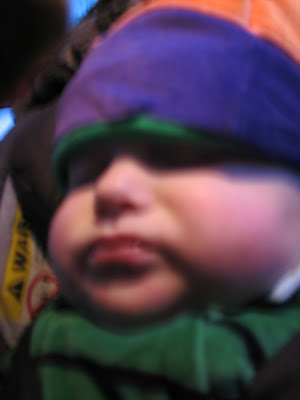 The Mommy Princess got to have some free time to blade all by herself back to the Royal Palace where all the Princes were waiting with the Royal Manny to greet her when she arrived safely home.
written and illustrated by: Amber at 6:57 PM 8 comments: 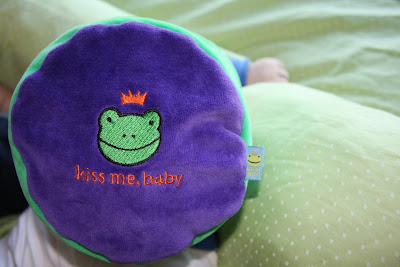 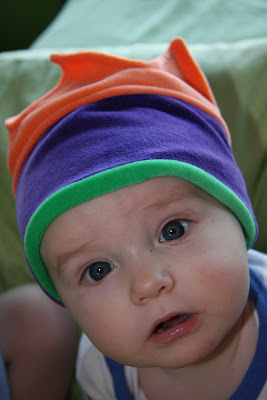 **check back for a royal fairytale adventure when Jason comes home with my memory chip!
written and illustrated by: Amber at 8:55 AM 3 comments: