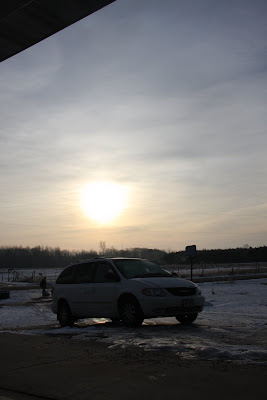 I must start off by warning that the munchkin was up every 2-17 minutes last night and I can't be held responsible for sloppy incoherent writing, and I'm not sure that I can give an accurate account of the incident I'm about to disclose what with my possible PTSD from it.

So we made our way home from bible study and joked and discussed and the kids fought like they normally do. We pulled into our driveway, which was glare ice from all the rain we had on top of the melting snow. I hopped out in my cute springy wedges and almost fell directly on my tush. Jason told me wait a second before getting the baby out, and I was all "why....it's freezing out?" and he said the van was slipping a little. We waited and the van wasn't slipping a little, and I proceeded once again to get the little guy out and get in the house before my toes froze off because it wasn't spring after all. I flung open the door and the van started to slide backwards down the driveway. Jason was on the other side getting Trae out, and like any white night would, jumped back into the van and put the brake on and saved all the kids, while I backed away and stood there like an idiot. I was actually telling him to just move, which was really dumb because you wouldn't really want the kids rolling down the driveway in the van. So yeah, I thought that was hot. Once the van settled, he lifted each of my children to safety in case it started to slide again...oh, wait they're his kids too.....doesn't matter, it made me weak in the knees to see him rescue the kids, and save us from yet another (read 3rd) $500.00 deductible in a year. Maybe I'll make him steak for dinner.
***the picture is dark, but the butt end of the van should be pointing directly into the sun. Seems it slid a little more while we slumbered and slept.
I decided since this blog is likely my new scrapbook, I'm going to start adding snippets of what the kids say, so they can read it someday and laugh their behinds off like we did.
Snippet: Elliot is the Spectacle Nazi, so anytime he catches Brookelyn without her glasses on, he tells her to get them on and if she doesn't, he tattles.
The other day, she wasn't wearing them when we were out for a walk. They were walking behind us and I heard him say "Brookelyn if you don't start wearing your glasses, you're gonna get a crazy eye!!" She was all "Elliot...no I'm not, and it's a LAZY eye, not a crazy eye..."
My parents are officially on vacation, they left last night. Yesterday out of the blue, Brookelyn came out of her room just sobbing. I asked her what was wrong ( I'm scared she's never going to tell me a thing because she flat out refuses to tell me why she's crying and I have no idea why) and she just keeps wailing. I finally ask if it that grandma's leaving for awhile and she nods her head and wipes her snot and continues crying on and off through out the next hour. I was IM-ing with my sister who was at my moms, so I thought I'd be all sneaky and have my mom call at just the moment Brookelyn was thinking about her and being sad. Well, call she did, and then Brookelyn refused to talk to her. She ended up calming down enough to call her back, but this morning she burst into tears again and got Archer all sad. Seems he's at the stage where he gets sad when others get sad. Or...maybe it was just that she was wailing in his face. Hmm, I suppose I could ask him later.
written and illustrated by: Amber at 7:23 AM 2 comments: