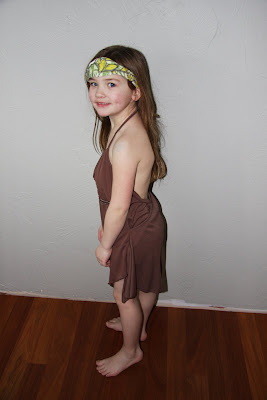 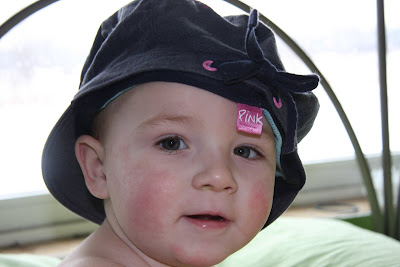 my kids decided to play dress-up today. first brookelyn came out in my swimming suit top, which made me think of nicole richie...i had to go into my room for something, and as i walked in brookelyn was stretching my thong underwear, i think trying to figure out what to do with it, exactly. i scared her and she shot it against the wall, which was pretty hilarious. incidentally all my belts/hats/underwear/lingerie are scattered across the bedroom floor. think victoria's secret would take trae on as a model...? i have to say he makes this hat even cuter than i do ;0)
written and illustrated by: Amber at 9:37 AM 4 comments:

stomping blind through the house.

I think I was losing my mind a little yesterday. I was sick with a sinus headache and a tight chest with an occasional cough or sneeze thrown in which was brutal on the chest. Anyway, I took Mucinex, the same bottle I used when I was trying to be "more fertile" way back when we were having issues with that. The idea is that is thins your secretions, thus creating a more fertile environment. The point I make by telling you that is the stuff works and all day I was dripping snot at random times on my arms and elsewhere.

I decided some rest might help, so I laid down with my boys. (Brookelyn was @ grandmas, Elliot was @ school) I was just drifting into a peaceful sleep when my cell rang. I sat up, and realized Trae wasn't where he'd been when we drifted off together. I catapulted blind through my house to try to get the phone, which stopped ringing the minute I laid my hands on it. I didn't take time to grab my glasses, obviously, so I'm trying to look for my boy in each room as I called his name, but it was like a big smear and he didn't answer me. I ran back into our room and checked the closet and just as I was getting frantic, I pulled my glasses on and see the little stinker curled up on the floor next to our bed. It's amazing I didn't tromp on him in an effort to answer my phone. He had his little drill curled up tightly in his hand and his head was right on our heat vent. I remember now telling him to quit with the drill...

I was mistaken in thinking Elliot had a 1/2 day, as he does almost every other Wednesday. Eventually I had to get in the shower and get the boys ready for my dad's birthday party. The idea was that when Elliot came home at 2:30, I'd get up and get ready. I woke at 3:15 p.m. and started calling his name. I hopped up and out of bed, without my glasses and ran to the mudroom to see if his stuff was there, which it wasn't. (because it was only Tuesday) I ran to his room thinking he'd probably fallen asleep, but he wasn't there and neither was his backpack or coat. I looked at the school calendar with squinted eyes and sure enough it was a 1/2 day...so where was he.....? I got to the panicky mode again, thinking he'd thought I wasn't home (which would make sense because Jason had the van, and the car broke last week so there were no vehicles here) I'm not sure when I got my act together and realized it was Tuesday, but all was well once again after that.

I feel worse today than yesterday, I have a migraine on top of it all. When Trae woke up, he found me and wanted to sit on my lap as usual. We were discussing important things like hammers and drills and tape measures. (no mention of the nuk this morning!) I was just commenting on a blog, when I felt a very odd trickle down my legs. I thought for a moment to make sure I wasn't peeing down my leg, and checked to see if he was dumping his "coffee" in my lap. Come to find out, HE peed down MY legs...which is crap because it says on the box 22-37 pounds and theres no way it weighed that.

Shortly thereafter a certain other diaper clad bush monkey pooped all up his back, and that got on my arm....It's a messy world in these parts.
written and illustrated by: Amber at 8:12 AM 4 comments: