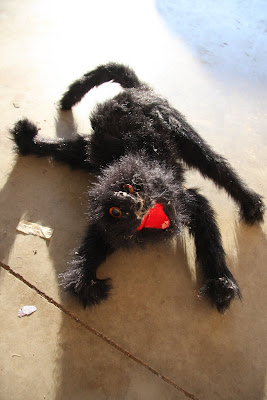 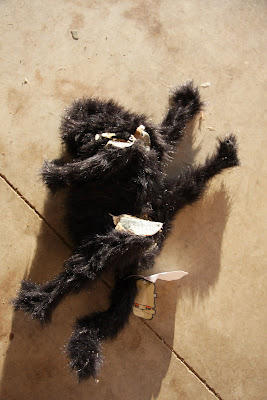 This is what happens when you mess with her brother.
The kids were playing downstairs. Trae came up sobbing and saying kitty. Brookelyn brought us this cat that I bought a few years ago for a Halloween party. He shrieked and screamed and sobbed. I made her take it back down, but now Trae always wants me to go downstairs with him. Yesterday, (and almost every day since he discovered the mangled cat) Brookelyn came charging at him with the cat. He was in a very whiny clingy mood to begin with, and I had stuff to do besides have him in my lap all day. I was getting frustrated with trying to unpack, tidy up the house, and try to keep both of my little guys happy, I didn't need her to provoke more tears from him. As it was he cried every time I had to pick Archer up, or go to the bathroom, or basically anything that didn't involve rocking him. I told Brookelyn to throw the cat out in the garbage because Trae was freaking right out knowing it was in the basement, which in turn upset Archer....and you know what happens when I have to pick Archer up.
When Jason came home from work, he commented that I had really done a number on the cat. I told him I was tired of the kids taunting Trae with the dumb thing, so I made then throw it out.
When we went to leave later in the evening, I saw what he meant.
This morning I asked Brookelyn what she beat the cat with....she smiled sweetly and said "a hammer..." I guess I always thought it would be the boys watching out for her.
Today started off rocky. Trae was doing his new throwing crap bit, and had roughly 3 time-outs in his crib by 8 am. That must have gotten it out if his system because he is happily writing on his pickle with a pencil and then putting back in the jar.
written and illustrated by: Amber at 8:28 AM 8 comments: