I'm sick of getting hit by deer. He hit me good and died. On the way home, he had 2 girlfriends by his side and they slunk across the road like they were sad. Boo hoo. My van has another dent.

On a side note, it's dumb to vacuum the van when it -10 degrees. The machine eats your quarters, and when you finally get one to work your hands freeze fast and it hurts so bad it makes you want to swear. Or cry. Or both.

And also, I got stuck in the driveway on my way out.
written and illustrated by: Amber at 8:43 PM 4 comments:

The Tale of a Mad Woman

This is the tale of a mad woman. When she gets mad, she gets very, very mad. One day, she woke up because her 2 year old son puked in her hair and on her pillow. She felt terrible for her little son and did her best to snuggle him all morning despite having a 3 month old that needed attention too. After things calmed down a little, she decided to take some pictures of the baby in his gorgeous new hat and mittens. The little baby didn't cooperate all that well, and about minuted into the photo shoot, the little boy puked on the set. She put her boy in their walk in shower while she stripped the set (her bed) of the dirty sheets. She got the baby to sleep while the little boy played in the shower, and then the woman showered too because of all the puke. Almost as soon as the woman climbed out of the shower, the baby began to scream because he was hungry, so she quickly toweled off, threw her robe on, and fed him while editing the pictures she'd just taken in Photoshop.

Imagine her surprise when all of a sudden there is a very loud rapping on her front door, a door no one ever uses. She hops up and finds her husband, we'll call him Jason, standing at the door, and his friend, we'll call him Jess, following behind. She spat out "Hello, I don't even had clothes on..." and then ran to her room as she called "why do you bring people over when the house is a mess?" The husband said he was dropping the car off and left. The woman had no idea what he meant by that as she breathed fire in the bedroom. When she was fully clothed, she called the husband on the phone he never answers and he actually picked it up. It shocked her because he had to know she'd be mad and usually would have ignored the call. Instead he answered it, and being very vague as not to let on to his friend what the conversation was about, gave her very generic answers that didn't pertain to what she was saying to him so she finally told him he better be ready to hear it when he gets home because she was VERY MAD ABOUT THIS. (or words close anyway) and slammed her phone shut.

To this day she still can't figure out why her husband wouldn't call ahead of time if he was bringing people over, or why he would drop his car off at home. She did ask in the phone call if his phone was broke (obviously not, but it was meant to be sarcastic anyway) She wishes she could tell the friend the story about why she was sitting at her computer naked on a weekday morning so he doesn't have to wonder "what was that all about?" She has calmed down a little since it happened, and now that I've shared her tale with you, why don't you go ahead and share it with the friend if you know him, so she doesn't embarrass herself further trying to explain herself the next time she sees him.

As for the husband, he'll probably drag his feet to get home to avoid his lashing, but what he doesn't know is she'll likely be over it by then and actually be laughing about it....not to say it can happen again or anything, but she'll let it slide this time.

The End
written and illustrated by: Amber at 11:23 AM 4 comments: 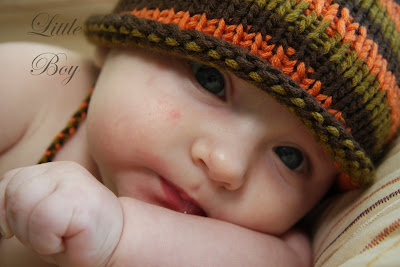 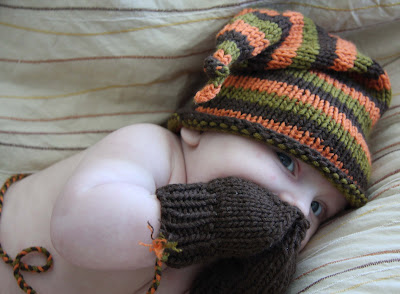 My friend Alaina made this hat and mitten set for Archer. The mittens were a surprise...they are so tiny and adorable. For more info on ordering, drop her a line on her blog. Thanks again!
written and illustrated by: Amber at 11:04 AM 6 comments: