I hate dieting, but alas, theres weight to lose (40 pounds, but who's counting?). Take a gander at my new blog Project Re-Vamp if you so desire and leave me all your tips and tricks to how you got your rockin' bod. I'd especially love to hear how the pounds melt off while you continue eating all the delicious things you love, but if that can't happen, I'll take all the others to. Thanks Y'all, I'm about to get crabby!
written and illustrated by: Amber at 12:29 PM 3 comments: 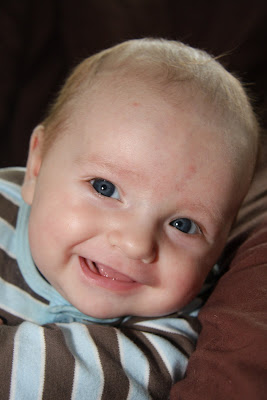 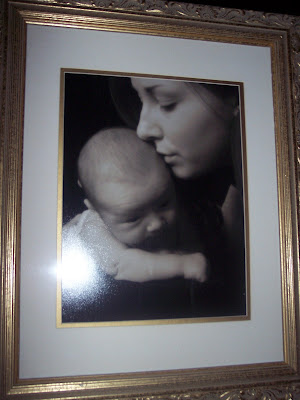 This is me & Trae...I'd say Archer looks very similar.
*Compare the photo above to the one of Archer on my sidebar...that's the difference 10 weeks makes! Unbelievable...
written and illustrated by: Amber at 9:17 AM 6 comments:

This morning, it's 10 degrees out.

I had Elliot sit on the front porch to wait for the bus, since it's rather windy out at the end of the driveway and there is a 15 minute time frame of when the bus shows up. (usually between 7:35-7:50) At 7:33, she flew past as Elliot was on his way out to the end of the driveway. Usually she slows down and honks, so I don't know what the problem was today, but I was rather irate at having to drag all four kids out in the frigid weather to do the job that I pay atrocious taxes for her to do, not to mention that he rides the bus almost everyday (like unless we're at my Mom's when Jason's hunting and I drive him) and she was going right there....why not slow down at least and give the kid a chance to get out there. I really want to busdrivernap her and tie her to a chair at the end of my driveway for 20 minutes (and then flick her in the nose...) and see how much compassion she has for these kids then. I sent a note with Elliot to give her tonight, but if she keeps up this attitude it will be war. I wrote in the note that I would rather not have to load up all four of the kids in the cold....and also that he was outside today when she flew past. It's so frustrating because I had to wake Trae up, and bundle them all up, and we have this weird thing with our heater where it blows on high continuously, which would be fine if I had the time to warm it up before bringing me newborn out in it, scrape my windows, drive the five minutes there with a screaming baby, drop him off, drive home, unload all the kids, take hats/coats/mittens off. In other words, A really big pain.

The kid, Braiden, that was picking on Elliot on the bus? He was sharing a seat with him....now, he sits with two other kids, and the principal told me there is plenty of room on the bus for him to have his own seat.....

Oh, and on the topic of Braiden. The principal called the two boys down to figure out a "solution." Braiden claimed he doesn't ask Elliot for his things, he was just kidding. They also established that if Elliot doesn't want Braiden to "kick him in the nuts" that he shouldn't play kickball with Braiden anymore. Of course, this is Elliot's rendition, but if they seriously allow kids to kick people in the privates when they play kick ball, that's really ridiculous...anyway, remember the missing compass? It showed back up on Elliot's backpack the very next day.

I think I better spend some time reading my Bible, as I am so tense right now that this bad morning is destined to turn into a very bad day. I need to work on my spirit.
written and illustrated by: Amber at 8:04 AM 7 comments: