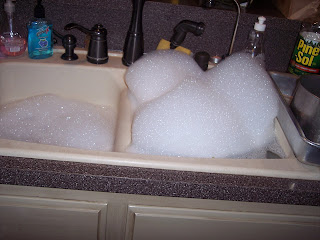 Oh yes, on the rare occasion I can be a ditz....Brookelyn thankfully noticed this and said "Mo-om, I saw all the bubbles over floating and I shut it off for you...come wook at all the bubbles!"...fits of giggles!
written and illustrated by: Amber at 1:37 PM 3 comments: 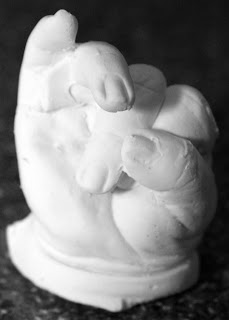 So, since I'm sure some of you think I must be off my rocker doing all these keepsakey things like belly casts, maternity pictures, and little replica's of my babies hands, let me just say I'd rather do them and throw them out if I decide I don't them, than not do them and wish I had. I'm such a sap, I know these things aren't for every one. I assure you I am, in fact, not crazy, just so afraid of forgetting....that's all.

We suffered the wrath of Archer to get this mold...between you and me, I may try again to see if I can get a little better detail. Shh...he's right there!

We have little hand molds of each of our babies, and they are by far the most treasured memento's we have.
written and illustrated by: Amber at 1:28 PM 3 comments:

Welcome to the most boring post of the century...I apologize profusely for including you in the hum drum that is my life this week.

Please note the time...if it doesn't read right it's 9:17....my kids actually let me go back to bed after Elliot left (they were all still sleeping sweetly) and Trae finally forced me out of bed at about 10 to 9. Since Archer has been born, Trae's been pretty much sleeping through the night, which rocks. He's not been feeling really well and has a cough and runny nose now, and slept like a rock last night.

We have a busy week here. Jason leaves Thursday night after work to head to Colorado on an elk hunt. We are getting ready for our garage sale on Saturday, and I hope to get most of the stuff hauled up and gone through today and tomorrow so I don't have to try and do it with all the kids by myself.

Our weekend was busy. I did my shoot on Saturday, glad to have made it in time after getting some really screwed up directions off Google Maps. Took me to a S. Pine street in a different town, with the address being a house instead of a church. Luckily the bride and groom were awesome about it. I did offer to stay through dinner, so that made for a long day. 10:30-8:30....Archer cried a lot for my mom, which makes me feel really bad. Once Jason got home at 5:30pm he was really good. That means that Daddy won't be making shooting (gun) plans while Mommy's shooting (40D) anymore. Luckily I only have 3 more weddings from now until the end of the year, two of which I can opt out of if I want. The money will come in handy, so I'm thinking I'll take advantage of that and go...

One more note: I am hosting and Arbonne party here on Thursday, October 30 @ 6:30pm. It is a launch party for Heather and everyone is welcome! Foot spas and facials for everyone involved....I'll be sending out some paper invites, so send me a note with addresses if you wish to be included;0)

On a spiritual note, because this struck me hard:
I was reading Luke 8 this morning about the woman who touched the hem of Jesus' garment. It spoke to me that even though he was in the midst of a crowd, he felt her touch him because she had the faith to believe he could help and heal her. I just thought that although we always feel unworthy, Jesus wants us to touch him and he wants to heal us no matter where we've been. I always feel like I'm insignificant and what am I in the midst of so many others, but Jesus knows us each by name. How would I feel if my children stopped asking for my help, assuming I only had the time for my other children or that the others deserved it more? Of course I'd want to help each one no matter what they'd gotten themselves into.

***update: It is now 11:37am, and I have discovered Archer is running a low grade fever. He's stuffy and not really eating well, so I'll just watch him closely and see where it goes. Trae has a very boogery (sp?) nose, so I gave him Motrin in case he has sinus pressure, as he is being a little devil today. I found my missing memory chip for the little camera when Trae dropped my memory chip thingy and the top fell off. I did fix it, which is great because it's how I view my pictures on my laptop. I folded 2 loads of laundry, washed one, emptied the dishwasher, re-ran it, and pulled all the sheets off my bed for washing. In spite of being exhausted, I am getting things done to keep myself from going insane, as our house is pretty much chaos. And it only gets worse when we bring the motherload of garage sale stuff up...

*Archer weighs 10 lbs now. He is growing so fast.

*Trae now reverted to saying Ah-Ah for Archer, but at least he says it. He can say Ah-cha, but chooses not to. This morning he was laying on the bed by the baby saying "HI, bebe!" and kissing him. He loves, just not so much when he's by me. On Saturday, he'd whine for my Mom to put Archer in the swing, and then not want anything to do with her when she gave the baby to Erica. That reminds me of this:

The other day I was in the mall looking at Motherhood for a jean skirt. They have a long one that my sister (who is not pregnant) got and it is so cute. Incidentally, I have one also, but I can't find mine. I wore it so much when I was expecting Trae that I banished it somewhere, and now that I want it, I can't find it. With winter coming, a long jean skirt would be nice and I haven't found any non-maternity ones so far....

Archer was fussing and Trae was crabbing and the lady asks "Is someone having a hard time adjusting to being big brother?" Trae just gave her the stink eye, and then she says to me "you know, cuz sometimes they have a hard time, I've heard of that..." I told her he was just tired as I left the store. Don't diagnose my kid, especially when he's strapped into a stroller. You think that might be the issue? I have found myself getting more dismissive (my nice word for rude) when people offer unsolicited advice/hugs/mystery diagnosis' to me or my children. Ijust don't need it/them.
written and illustrated by: Amber at 9:18 AM 1 comment: