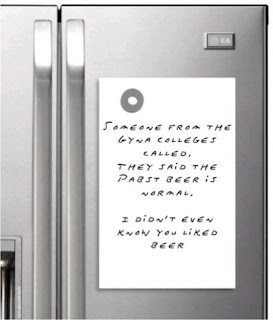 written and illustrated by: Amber at 3:32 PM 4 comments: 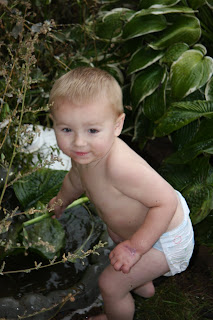 Traeman escaped out the front door in his diaper and decided to play in the birdbath and the rain. (of course I knew he went out, what kind of mom do you think I am?) I decided to grab my camera and shoot a few pics. (he was uncooperative, this is the only one that turned out) When I brought him in the house he said "oooo, cowd!!" (cold)

Archer has started to smile and coo at us when we talk to him, which is so precious. He must be gearing up for a growth spurt because all he wanted to do throughout the night is nurse and coo, so I'd think he was cute instead of thinking he's a little stinker.

The hormone balancing cream I mentioned that I'd used to relieve a migraine? Yeah, I've used it 2 more times, and now my tata's are really sensitive, like pregnant again sensitive. (of course I'm not, but it's that bad) Takes this new all-night-long nursing regimen to a whole new level. On a different note, my eye is still bloodshot and feels pretty scratchy. I hope it heals before Saturday because I have to shoot another wedding and I really hate to shoot with my glasses on. Which brings me to this:

The "other" photographer and I didn't get along to famously on Saturday...she has issues with me being the lead, since she's a bonafide "commercial" photographer for a big corporation (KC) but my boss doesn't think she has it, so I was the "lead" for the day. That and she shot an entire formal session out of focus, which creates big problems for everyone involved, it is their wedding after all. She actually took me for an idiot and was telling me as she dropped her memory card on the floor, that "no wonder my memory cards all defunct" Okay, I'm so not that dumb. Obviously, a dropped memory card doesn't make just the formals out of focus... Anyway, to make a long story short, I went into the studio and the first thing Deb says is "So, you and Ang didn't hit it off, huh?" I replied "Not really, why? Who'd you hear that from, her?" Of course. The problem was that I wasn't technical enough and didn't make like a professional and adjust my tripod for 4 minutes before shooting the picture. (I'm advanced, I don't need a tripod!)j/k....anyway, she told me I was doing something incorrectly, and I told her Deb's never complained and did just what I was doing for the entire shoot while she stood behind me with her arms crossed and pouting. Deb asked if I thought I could handle this weekends shoot myself, and I said if you're going to send her, don't waste your money. So Deb called her and said "Amber says she can handle the shoot on her own, so if you'd like to go fishing with your boyfriend or something, you can do that." So I'm on solo, which I'll take over shooting with someone who's so good, she has to go out of her way to work against me, and according to Deb, (I stress that because I've never seen her work, and don't wan to come off as thinking I'm the best or whatever) doesn't deliver...which was really weird, because as I told Deb, I was thinking by the way she looked all professional and what-not, that certainly she'd come back with way better shots than I. Not so, I guess, and then Deb yelled at me and said I need to have confidence in myself. Well quit sending me out as lead with people who spend all day telling me that I'm doing this or that wrong. Oh, and I might add, it's a little awkward because they've all been there longer than I, and are irritable that I'm, how to say this?, in charge? Very awkward, and just a note that I'd rather not take the lead because it's my butt if things turn out bad. Which is the reason that when I'm the lead and someone else wants to take over, I don't let them. This is so hard because I'm not really a confrontational person. I mean for the most part, unless someone really deserves it. I always say "well Deb said...!" And Deb says the only reason she was sending anyone with me anyways was because she was "worried about my boobs" and me too, she doesn't want to stress me out. I didn't tell her this, but I'm apparently stronger than I look to, because I can do my job without a problem even after just giving birth like 4 weeks ago. (she's never had kids, she doesn't know..and I conveniently snap back pretty easily, thankfully) Stupid and wimpy...now does that say Amber to you?

*note: This is a bit of a rant, and this is my cheap therapy, so I stress again that if you don't want to read my ranting feel free to skip it.
written and illustrated by: Amber at 8:17 AM 3 comments: