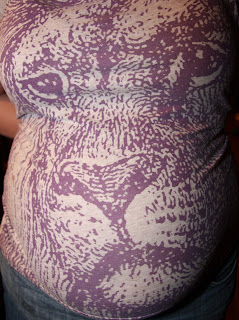 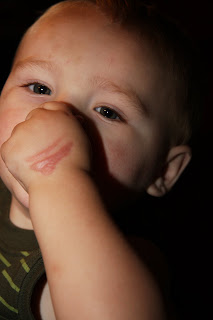 Trae learned how to do pew...he's been quite the copycat lately and picked this up right away, as in my mom said "pew" and pinched her nose, and he immediately did the same.
New words: bike, duck, book, balloon, beast (wildebeest), Trae, milk, John Deere
Favorite words: me, mine, ball, ba (bottle, he shortened it. He hasn't had one for months but calls his cup his "ba" Jason tells him it's his cup)
He says everything with a German accent...milk = milque. I really think that he can say these words and I'm taking awhile to catch on because he'll say like 3-4 "new" words in one day.

*I forgot to post yesterday that my mom gave Elliot the keys to unlock the van since I was carrying Trae and the leftovers. He unlocked the door, and then while I was strapping Trae into his seat, he started it up. I was right there of course, and totally surprised. I explained that he can't do that until he can drive and his dad had a talk with him to.

*I forgot to add one detail to the constipation story...the lady that was constipated was a Walmart employee. Talk about professionalism.

*Last night in meeting, we had some visitors. Trae sat down next to the man, and started to poke him. After a while, he started pinching him. The guy thought it was funny...I was in the bathroom so I didn't see it otherwise I'd have been horrified. Trae also threw his book and his cup, which is a totally new thing, and babbled on and on. Any ideas for keeping him occupied and quiet? If we bring a book, he talks about whatever's in the book. His favorite is a tractor book (thanks Lana) and my first 100 animals. But he talks about the tractors, ducks, dogs, and asks Brookelyn, "what's that?" "what's that?" over and over and over...
written and illustrated by: Amber at 8:16 AM 7 comments: