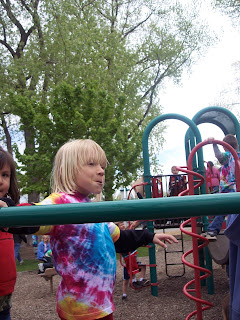 This is Jeff, Emily's twin brother. SHe was pointing him out, but I had no clue who she meant until he looked at us straight on and I realized they look almost identical. 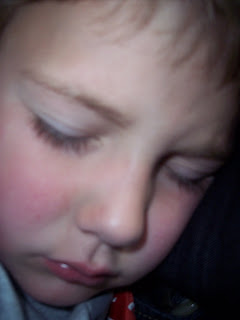 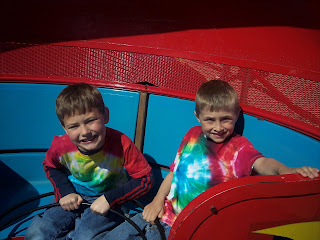 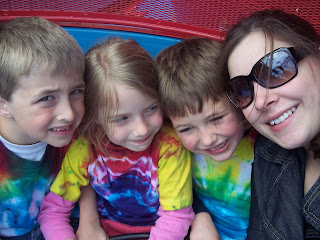 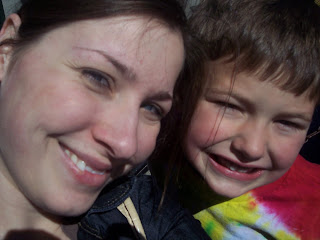 Observations:
* I am so glad I didn't have twins. I had Elliot, Gabe, & Emily. Gabe doesn't listen. He's also crude and obnoxious...making gestures to kiss his butt, or up yours! Emily made me sad. She kept calling me mom, which Elliot didn't accept, but she would look at me like I was her whole world. At one point she commented that she wanted a Sea Gull to bite her because "she wants to die"....said flat and without emotion.
* I'm not a Tilt-A-Whirl girl anymore. I only went on because Emily was too short to go on without an adult, and the first time the boys went, she got teary on me. I felt bad, and agreed to go the next time so she could go, since it's her favorite ride. We went after lunch....our car was spinning like crazy, I was getting really dizzy, and Elliot was yelling "It's baby kicking time!!" Don't ask, I have no idea.
* Bird poop on another mom's shirt...I don't think she knew it was there. I wasn't up to being like "Hi, I'm Elliot's mom, nice to meet you....do you know a gull pooed on your sleeve?" So I didn't mention it.
* A girl about 10 walked by with her mom, and then turned around and threw her sweatshirt at her mom. Her mom stopped and told her to come pick it up. She turns around, glaring, then stomps over, and says "FINE, BUT I'M NOT GOING!!!" Mom replies "going where?" "HOME" The way I see it, if you go on a field trip and the bus is leaving, you best be on it honey. She walked away(this is in a playground area with a bunch of little kids) kicking wood chips up for all she was worth...at her mom, at other kids. I'd love to see the teenage years, as the mom had only that one response, to make her pick up her own coat.
* We were waiting in line for the boats, and this little boy(2-3) is begging and crying at the lady to let him on. He is all alone, but she refuses because he doesn't have a ticket. He falls at her feet, and continues crying and pleading with her. Another mom from another school asks if he's with me, and I assumed he was with her. After figuring out that he is with no one and lost, we ask the girl at the boats who he's with. She says she doesn't know, he just keeps begging for a ride, but doesn't have a ticket...he's been doing this for like 10-15 minutes. My first thought was "why are you not trying to find who this kid belongs to? Why not get him on the boats regardless if he has a ticket or not so that he doesn't wander further, in hopes someone will come looking for the kid? Why not find someone else who can help this boy find his party? Apparently none of that crossed her mind, and she just kept encouraging him to go find his mom and ask her for a ticket. I ask where I can go to have someone announce that BusyBee Daycare out of Shawano, WI has lost one of their children. She says if I go look for someone in a dark blue polo shirt or maybe a light blue sweatshirt, maybe they could help? Oh yeah, she was that clueless. The other mom spotted a group that were all wearing yellow shirts, but she had just put her kid on a ride, so I gathered my group, and before heading off, told the girl to make sure he stays there until someone comes for him. I spotted his group and was going to alert them of the missing boy.(the other mom gave him a ticket so he could ride the ride) I walked up to the daycare group, who were having lunch at a picnic table. "Do you realize your missing a kid?" I say. "no, we have sixteen....12345678910111213141516....I have 16 on my list. Two other teachers go to the boats after I explain that's where I left him and how I made the lady keep him there until the could fetch him. The 4 teachers are asking each other who could be missing, they have 16, and there's 16 on the list! I tell them "well, he's wearing your shirt and he's all alone, I suppose you should go check and see" They actually only had 15 kids at the table, despite counting like, 4 times. I stayed nearby to see what happened when they returned. The two teachers walk up and one says "she gave him a ticket for the boats! Can you believe that? He asks for a ticket and she just gives him one....?!" Well, I didn't give him the ticket, but I thought it was ridiculous that she was faulting me for giving him a ticket when they had lost him and didn't even realize it. There were 4 teachers, 16 kids. Simple math gets you 4 kids per teacher....every time I saw the group that day, I counted to make sure they had 16. I'm so fortunate not to have to put my kids in daycare.
written and illustrated by: Amber at 3:10 PM 5 comments: