Elliot's report card came yesterday. I am going to brag about my favorite part...he is advanced in art and music!! I love that he is advanced in the creative areas:0) He did make some good leaps in his reading, but the teacher says " he needs to concentrate on good listening skills, because he is having issues demonstrating appropriate behavior in the classroom." Or something along that line. They have this system at his school where they have a stoplight and all the kids start out the day on green. If they miss-behave, they get moved to yellow and red. If they get moved to yellow or red, they get a note sent home and their parent has to sign that they read the note. Elliot got on yellow once THIS YEAR for running and getting finger paint on another child's shirt. So if he's been acting up in class, why hasn't he been moved to yellow and/or a note sent home about his behavior? I'll have to make a call to school and see why they haven't brought this up except leaving a scribble on his report card about it. In the meantime, I read what the teacher wrote to Elliot, and he hung his head and said he'd be good from now on. It frustrates me because Elliot was coming home a few weeks ago, saying he was being put "on the wall" at recess. He came home a few times in one week saying this, so I called to talk to the principal, and asked if he was having problems behaving, and she said not that she was aware of, but she'd check into it and get back to me. I never got a call back, so I assumed everything was fine. The only teacher that didn't write that he was well behaved and a good listener was his homeroom teacher, but if that's the case, don't you think she would call me? Anyway, I'm proud that he is doing well, but frustrated that I haven't heard about this before. So I'll stop venting now, and call the school to see what's up.
This morning when I went to get Elliot up, he wasn't in his bed. I looked under the covers and in Brookelyn's room, but I couldn't find him. I started calling his name, thinking to myself that maybe someone came in to our house during the night and took him. Or what if he wandered off to play outside and someone took him? Obviously, this isn't typical, but neither is Elliot not being in his bed at 7a.m. When I started calling his name, he crawled out from under the bed skirt on Trae's crib. Apparently, he slept there all night. Hmm. Well, it got my heart pounding, so at least I was awake.
Trae said "please" once, and did "ruff, ruff" once. Maybe a fluke? He is officially off his bottle, but according to my mom, he NEEDS it and cries and begs for it when I'm gone...apparently she told Jason she thinks we should leave him on the bottle until I'm done working:0) Tonight is my last night, but he's not had a bottle in over a week, and we're not giving him one tonight.

*just an update...I called Elliot's teacher and asked for specifics on his behavior so that we can work on the problems at home. She thought it was worth a mention because at the beginning of the year he was such a good boy, and now he "sometimes gets distracted by the naughty kids" so she has to remind him to "ignore the bad behavior, and choose the good." Not that I'm demeriting(if that's a word) her point, but I get distracted by unruly adults, so unless he's actually participating, it seems unfair to note it, especially without an explanation. She seemed very surprised I called, but did say she appreciated my concern, and if she has any issues, she'll note them in his agenda from now on so we can work together to keep him one of the "good" kids. She asked me if I had any idea why he started out so "good" and now he's "being influenced by the bad" and I said that school in general has taught him a lot of things that are not accepted in our home, especially the rough housing. I told her that he got a lot more aggressive and I understand where he gets it because I've been on the playground with him and the kids tackle and throw balls at each other and wrestle, and the aids don't say anything about it. I'm glad it's straightened out, and I can work with Elliot on these things, because he is a good kid, and I want him to do well in school and not be in the "bad" club. I realize all the "good" and "bad" is probably annoying, it annoyed me the way his teacher kept saying it, and I had to write it out for you guys for the full affect. Choose the good, not the bad. I guess I'll have to get used to that sentiment, since that's what they use in school...:0)
written and illustrated by: Amber at 9:01 AM 3 comments: 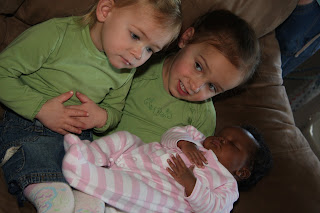 We want a baby for your birthday...we're not picky. Boy or girl will do, but we'd really like twins!! See how good we'd be with them? We love you lots mommy, and hope you have a wonderful day. Your Girls, xoxo
written and illustrated by: Amber at 8:31 AM 2 comments: