Where is this day headed? 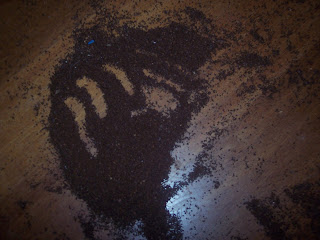 I swept up the coffee but he got over there before I could get the dust pan. Aren't his prints adorable? 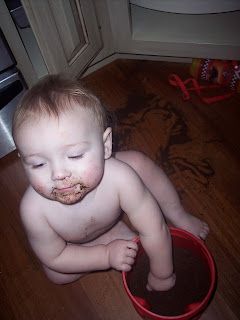 This morning, Trae found the coffee in the lazy suzan... he's so far found oatmeal, raisins, formula, & coffee...I keep switching things around, and he just finds something else! He loves things with plastic covers he can chew off!
FRIDAY:
Yesterday morning, Elliot missed the bus. The bus is usually here between 7:37 and 7:45am. Elliot was argueing with me about needing warmer gloves, which he had and lost, and the bus sails by at 7:33. Awesome. So, I have no other choice but to wake up the other kids, dress them, bundle them up, and take him to school. The whole time i'm trying to get everyone ready, Elliot's going " Can you hurry mom, I don't want to miss recess..." We got him to school and headed home. About an hour went by, and then I heard Trae fill his diaper. When the blasting stopped I picked him up to change him and discovered he had poo running down his leg and out his jammie bottoms. This mess was no match for baby wipes, so we hopped straight into the shower. ( We've given Trae showers w/us since he was born and he refuses to take baths now...) Anyway, we got him scrubbed up and he was so tired he was falling asleep under the warm water. Something about it must make him relax, because he does this several times a week. If not for the fact he showers with us, it would be a darling video! We will be breaking him of this habit soon, in case anyone is worried about him...! At this pace, I was afraid to leave the house for fear of another poo-running-down-the leg-episode taking place in public, but there were errands to be run. One if which was to meet with the photographer I shot with on Saturday to reveiw my images. We did our errands, had lunch, and then mom watched the kids while I went to my meeting. After waiting for her to finish up some things (30min) we finally brought up my images. I used her memory card, so I hadn't veiwed them yet. The pictures were good, but everytime she'd bring on up and pause, I expected her to say " this is a problem because..." or " this shot would have been better if..." but surprisingly, she had many good things to say. She's an expert, with 30 years under her belt, and gives constructive criticism. The first wedding I did, I had no clue what she wanted and she didn't give me a one. Upon reveiwing my photos, she gave me a 4 out of 10...:( The second wedding, I asked more questions, and she told me what she wanted, and I got 7 out of 10! Improvement overall 8. It feels good because I want to be a photographer so much. I love it so much, but I didn't have a portfolio that included weddings, so I called her up and asked her to train me. She said yes, after drilling me about why I wanted to do this and seeing some of my work. She's shooting a wedding today, and said she would miss me, so that's a good sign. I told her I wish I could be there to, I would much rather do that than this group home stuff. Her reply " come this summer, you'll be doing just that!" And so the day just got better.

As I was reading a story to Brookelyn, Trae toddled up and wanted to sit on my lap. I picked him up and sat him down, and he turned and gave me the sweetest kiss on the lips. I would recommend kids to anyone...
written and illustrated by: Amber at 9:21 AM 1 comment: